STOP THE ONGOING GENOCIDE IN VICTORIA 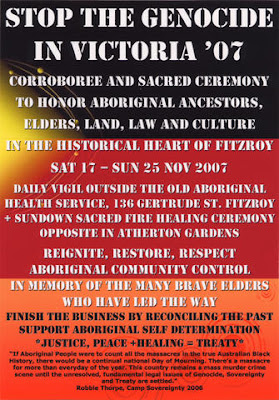 Founded in 1973, the Victorian Aboriginal Health Service (VAHS) moved from 229 to 136 Gertrude Street in 1976 after signing a 99-year lease for the premises with the State Government. Many Aboriginal People were dying in the streets due to prolonged oppression and denial of basic human services. As staff worked without pay due to lack of funding, Aboriginal Elders including Alma Thorpe and Dr. Bruce McGuinness pioneered to establish critical community controlled preventative health care to ensure the survival of Aboriginal Communities in Fitzroy and nationwide.

In 1991, VAHS lodged an official complaint to the Minister of Police and Aboriginal Affairs regarding 'ongoing brutalisation' of Aboriginal people in the community, which continues to this day. Since the official opening of the new VAHS at 186 Nicholson Street in 1993, the old Aboriginal Health Service in Gertrude Street has been left abandoned and derelict for 15 years. Mission Australia recently won a tender to redevelop the site into a 'bush tucker' restaurant where Kooris would be trained to 'serve' as waiters under the Mission banner. How much more insulting and low could the system go in trying to extinguish Victoria's history of Aboriginal struggles for self-determination and human rights? With no Community Cultural Center in the vicinity of Fitzroy, the local Aboriginal community want to see this site resurrected as a crucial Community Meeting Place for healing, traditional culture, and in honor of the many brave Aboriginal Ancestors and Elders who fought for so long to live and die with dignity.

Following the National Weekend of Action (Nov 16 –17) members of the Fitzroy and Victorian Indigenous Communities and supporters will stage a week-long vigil outside 136 Gertrude Street to bring overdue attention to these injustices at 07' Election time. Each sundown the Sacred Fire Traditional Smoking Ceremony is being reignited across the road in Atherton Gardens for community healing and to pay respect to all who have not lived to see the struggle for justice end.