Indigenous Rights in the Pacific Basin: Struggling to Stay Afloat Despite Stranglehold of Economic Globalization 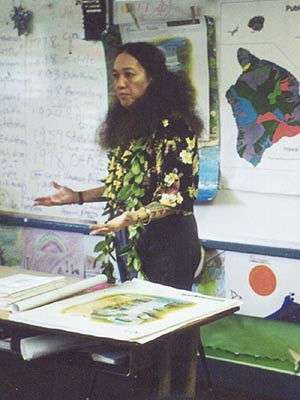 Some say the modern era in the Pacific indigenous rights movement began after World War II mainly in response to two things. The first was the recognition of the right to self-determination for colonized peoples in the newly drafted UN Charter.

The second major event in 1946 was the onset of a 50-year era of Pacific nuclear testing led by the U.S. in the Marshall Islands, followed by the United Kingdom in 1952 and France in 1966. The Pacific indigenous rights movement can be viewed as a response to the West's colonial domination in violation of the UN Charter's call for decolonization and the West's Cold War pretext for use of the Pacific islands for devastating nuclear testing.

That struggle is now extended to fight neocolonialism in the form of economic globalization. Indigenous islander Mililani Trask talked about this issue at a forum in New York City in November called Indigenous Peoples Resistance to Economic Globalization: A Celebration of Victories, Rights and Cultures.

Mililani Trask, a Native Hawaiian attorney with an extensive background on Native Hawaiian land trusts, resources and legal entitlements. Her work has been cited by the Hawaii Advisory Committee to the U.S. Commission on Civil Rights and published by Cultural Survival and IWGIA magazines on issues relating to native people and human and civil rights. Mililani is a founding member and current chair of the Indigenous Women's Network, a coalition of Native American Women whose work includes community based economic development, social justice, human rights, housing and health. In 2001, she was nominated and appointed as the Pacific representative to the United Nations Permanent Forum on Indigenous Issues and is currently considered an indigenous expert to the United Nations in international and human rights law. She is an instructor with the International Training Center for Indigenous Peoples in Nuuk, Greenland and a lecturer with the University of Hawaii Center for Hawaiian Studies

Listen to the Show

An Indigenous Perspective on Climate Justice

We spend the second half of the hour speaking with Oannes Pritzker, a Native ecologist , journalist and activist of the Wabanaki people. He discusses global warming and how lack of spiritual attention leads to environmental disaster. He is director of Yat Kitischee Native Center; an Inter-Tribal Cultural/Environmental/ Social Justice/Educational/News-Media grassroots organization. Oannes has participated in many international, inter-tribal, and national conferences, gatherings, campaigns, and protest actions. He has traveled throughout much of the world as an activist and journalist, reporting on many issues of earth-justice and human rights. He is host and producer of a weekly one-hour worldwide radio program; "Honoring Mother Earth/Indigenous Voices" broadcast on Radio for Peace International, on Radio4all.net, and a number of community radio stations across North America. As an Ecologist, Oannes has been actively involved in the establishment and leadership of the national environmental justice movement, which he remains active with. More Info is available at the Yat Kitischee Native Center Web Site.