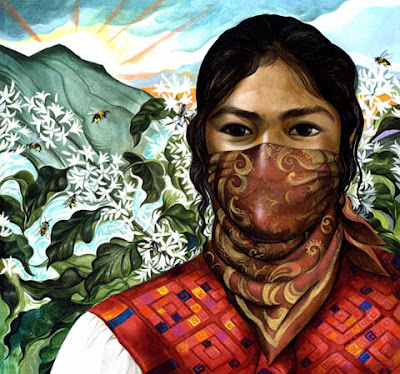 The time of revolution has not passed. Despite celebrating the collapse of Soviet-style communism and promising yet another social and economic renaissance, the world capitalist system is in deep trouble: East and West, North and South.

If you listen carefully to the celebrating voices, those of the rich and the powerful in their corporate offices and government buildings, you can pick up a nervous undertone. If you watch the policy-makers closely, you may notice that the smiles are often thin and the hands that hold champagne glasses sometimes twitch, involuntarily.

If you listen even more carefully, you can discover why. In the background you can hear another set of voices--those from below--far, far more numerous. These are voices the powerful do not want to hear, but they are having a harder and harder time ignoring them. Some of these voices are quiet and determined, talking together in bare tenements. Some are singing and reciting poetry in the plazas, or stirring young hearts with old tales deep in the forests. Some are discussing, planning their future, inventing new worlds. Many are angry, increasingly impatient, sometimes shouting on picket lines or chanting in the streets. All are talking about revolution, whether they use that term or not. The policy- makers of capitalism have good reasons to worry.

The voices and writings collected here come primarily from the Zapatista National Liberation Army (EZLN), the army that woke up the world on January 1, 1994 by seizing four towns in Chiapas, the southern-most state of Mexico.

The EZLN has organized itself among some of the most dispossessed people of the world. Its composition is almost as diverse as the outside world to which it speaks. Its soldiers are drawn from the forests, mountains and small towns of the region, both from the Indigenous and linguistically diverse Mayan population, and from immigrants from Central and Northern Mexico. Its soldiers have been subsistence cultivators and landless wage-laborers; they have grown and marketed their own export crops and they have worked on the plantations and ranches of others. They have cultivated their milpas (corn plots) on rocky hillsides and sought temporary manual work in the towns. They have toiled as unskilled laborers and skilled artisans. A very few are intellectuals drawn to the area over a decade ago by their ideals and hopes.

For those of us outside this movement, these de-
professionalized intellectuals serve as mediators to help us understand the larger political processes out of which the EZLN has emerged, and within which it continues to operate. They have drafted many of the communique's and served as the public voice for both the Army and the wider community. They speak our language and speak to us in words that are familiar. We can understand them easily because we all share the forms of discourse common to Western political traditions.

But, the words they speak, and the way they speak them, are translations of other words and discourses rooted in other, much less familiar languages and ways of being--the diverse Mayan cultures of the region. Fortunately for us, the Zapatistas are very self-conscious speakers, and often speak to us about their own speaking, so that we will understand the words that come to us through their mouths. They are the words of those who have gone before us to the people of Chiapas; they are the voices of people who have learned to listen.

As some of the statements you will find in this book make clear, the spokespersons who speak to us today are different from the urban intellectuals who went into the mountains years ago. Those intellectuals carried with them a whole left-wing baggage of theoretical and political preconceptions which proved totally inadequate for communicating with the local population.

In the confrontation of those preconceptions (which they now call "undemocratic and authoritarian") with the collective decision-
making traditions of the people living in Indigenous communities, those intellectuals were transformed (as were, undoubtedly, the locals). In these documents we only get glimpses of this transformation, but it seems to have been remarkable--one in which the authoritarian relations of the Zapatista Army came to be subordinated to the democratic processes of the communities. In the process the interlopers seem to have learned to see things with new eyes, to do politics in new ways.

Along the way they seem to have acquired a simple, vernacular way of speaking which makes reading their communique's and their interviews refreshing in comparison with the familiar, jargon-laden political diatribes of old-left guerrilla groups. It is probably this quality which has made the motivations, hopes and aspirations of the EZLN and the Chiapanecos so accessible to the wider Mexican community and beyond. The Mexican state's efforts to portray the EZLN as a group of outside agitators, of "professionals in violence," quickly collapsed in the face of the obvious: Theirs were not old voices but new voices, and their language was not that of ideology but of frustrated desires, urgent needs and committed determination.

Their words, the spokespersons tell us quite explicitly, come from the collectivity, not just the individuals. This, they say, is one reason why they wear ski-masks--so our reception of their voice can be divorced from the face, the personality of the individual. The desire to avoid caudillismo (someone being singled out, or even putting themselves forward, as "the leader" of the revolution) is quite explicit. This approach, of course, is primarily symbolic, as the individualities of the speakers inevitably do come through, as in the best-known case of Subcommander Marcos.

Thus formed through a political process of dialogue and collective struggle, the voices in this book articulate two fundamental messages. First, they explain why they reject the current institutions and development projects of Mexican business and government. Second, they explain their own new political synthesis and their own political proposal for the future of Mexico.

Documents of the New Mexican Revolution