http://indymedia.org.nz/newswire/display/74346/index.php
The following statement from the Workers Central in the Department of Oruro, Bolivia, in solidarity with the workers and Maori activists arrested under the so-called 'anti-terror' raids has been received.
It is signed by the Central Obrera Departmental, the union centre to which all unions are affiliated in Oruro, November 9th.

New Zealand workers should note that Ururo and the COD based there is the centre of the miners movement in Bolviva which has led several revolutionary uprisings since 1952. It is significant that this union has as its founding documents, the Theses of Pulacayo, written in 1946 which clearly call for an anti-imperialist struggle for socialism. These sentiments are echoed today in the statement below at a time when Bolivia is at the brink of a civil war.

"STOP THE STATE AND PARAMILITARY REPRESSION IN NEW ZEALAND" 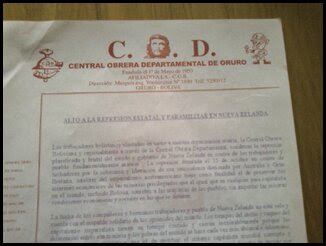 "The Bolivian workers affiliated to our central organisation, the Central Obrera Boliviana, and belonging to the Central Obrera Departmental, condemn the brutal deliberate repression of the state and Government of New Zealand against the workers and indigenous Maori people.

The repression unleashed on 15 October against fighters or liberation and sovereignty in this semicolony dominated by Australia and Britain, satellites of American imperialism, is intended to protect the economic interests of the privileged minority that exists in any capitalist country in the world, including Bolivia, and who subject the majority of the people to the most miserable social and economic conditions.

The struggle of the brother and sister workers and people of New Zealand is not alone and has the backing and solidarity of the oppressed of the world. The epoch of the abuse and plunder that imperialist capitalism has enjoyed has led inexorably to the differences between this minority and the poor in the world to become more and more abysmal and inhuman.

We have no alternative but to replace the corrupt and degenerate world capitalist system with a system where the majorities have the right to decide their future by redistributing wealth among all the peoples who are its inhabitants - a system where human rights are fundamental and not for the profits of an irrational and unlimited capitalism. The system can not be anything less than socialism, inspired by the most human and patriotic sentiments. The dilemma facing humanity is: Socialism or the reign of Barbarism"