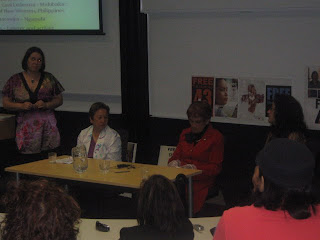 No To Further Sell-Out Of Land, Sovereignty In The Name Of ‘Free Trade’
While foreign and trade ministers attending the Asia-Pacific Economic Cooperation (APEC) Summit in Japan discuss further opening of economies for ‘free trade,’ women activists say no to further sell-out of land, culture and sovereignty. They denounced APEC, Trans-Pacific Partnership (TPP) and other trade deals that ensure huge profits for big business at the expense of women, workers, indigenous peoples and other disadvantaged sectors.

“In 1975 we marched to demand not one more acre of Maori land to be sold. Now more trade agreements are being negotiated above our heads without our participation,” activist lawyer Annette Sykes says as she points out that the capitalist neo-liberal agenda is the new form of colonization. Sykes challenged the participants, mostly students and young women to speak out and revive a strong women’s movement in defense of land, rights and self-determination. “With the Terrorism Suppression Act and Search and Surveillance Bill that allows installation of listening devices into our homes, the state’s actions are meant to silence us and tell us that it’s not right to demand land, rights and liberation.”

Welcoming Ledesma, distinguished Maori woman leader Titewhai Harawira says, “I remember coming to the Philippines in the ‘80s where I was shocked at how women were treated. At the same time, sharing the pain of struggling indigenous women in the Philippines gave me a lot of strength.” Denouncing the latest news on mining exploration projects in NZ, Harariwa says, “Enough is enough. Neo-liberalism means theft of land, theft of identity, theft of culture. Corporate giants spend billions to save the whales. They save the whales while they shoot natives and grab their land.”

According to Ledesma, “It is important for women to find the correct analysis and understanding of the cause of oppression of women. Women's oppression is not a problem between men and women, but a matter of class oppression that began when classes in society emerged. The oppression of women will be fully eliminated, and the real liberation of women achieved when the system of exploitation and oppression of one human being by another will be abolished. Today, global monopoly capitalism operates on insatiable greed for profits at the expense of women, indigenous peoples and other marginalised sectors. Socialism will remove the conditions that have made women unequal to men.”
At the forum, Ledesma also appealed for solidarity for women activists in the Philippines currently detained on trumped-up charges including Angie Ipong, a 65-year-old church worker and veteran social justice activist who has been jailed since 2005.

Ms Ipong was arrested by the military while she was giving a seminar to peasants and women leaders on the Comprehensive Agreement on Human Rights and International Humanitarian Law (CARHRIHL), one of the landmark bilateral agreements reached in the government-NDFP peace talks. She was missing for 13 days during which time she underwent torture while undergoing interrogation. She began a hunger strike from day one of her illegal arrest to force her captors to surface her and allow her to have access to her lawyer.

Looking at the photographs of Filipino women detainees Angie Ipong and the two nursing mothers among the Morong 43 health workers, Harariwa notes, “I’m sad to see you’re still carrying placards for these women to be free. I believe that no one is free until everyone is free.”
The forum organiser says Maori have learned a lot from cross cultural korero. Helen Te Hira from Auckland Philippines Solidarity says, “Maori have been to the Philippines over the years, learnt and discussed about colonisation, militarism, deforestation, so this is women from different communities talking and exchanging their experiences and hopefully from that we will get sense of where we have come from and where we're going.”

“With the governments of New Zealand and Philippines both selling off the people’s ancestral domain and sovereignty to foreign powers and local business elite, Maori and Filipinos share a common struggle to defend the rights of women, indigenous people and all disadvantaged sectors in the face of large-scale mining and other destructive projects against the people and environment,” Te Hira noted. The forum participants affirmed solidarity on common struggles of Maori and Filipinos especially against mining corporations and big business causing massive community displacement and loss of ancestral domain in Aotearoa and Philippines. “In building women’s networks, we need to find linkages to strategies with those who have common desire to eliminate poverty and violence against women” Sykes adds.

“One hundred years after the declaration of the first International Women’s Day, the International Women’s Alliance (IWA) was founded on 16th August 2010 in Montréal, Canada immediately after the successful Montreal International Women’s Conference attended by more than 350 participants from 32 countries. Faced with global concerns including indigenous struggles, developmental aggression, violence against women, racism, discrimination and genocide, resistance to wars and imperialist aggression, IWA aims to foster the creation and coordination of local, regional and international campaigns, to promote mutual support and the sharing of resistance strategies, and to mobilize women around the world in the struggle against imperialism, violence and capitalist globalization,” Ledesma shared with the forum participants.

Ledesma enjoined the women of Aotearoa to join the first assembly of the International Women’s Assembly in July 2011 in the Philippines. The forum closed with the signing of the international petition calling on Philippine Pres. Benigno Aquino III to effect the immediate release of Morong 43 community health workers who have been illegally arrested, tortured and detained since 6th February, including 26 women, two of whom gave birth recently. Around 30 signatories include Titewhai Harawira – Ngapuhi, Maori Council NZ Annette Sykes – Lawyer and Activist, Catherine Delahunty - Member of Parliament, Green Party of Aotearoa, Lena Henry – Iwi Have Influence, Helen Te Hira - Auckland Philippines Solidarity, Ann Pala - Ethnix Links, students of Auckland University and members of various groups. # 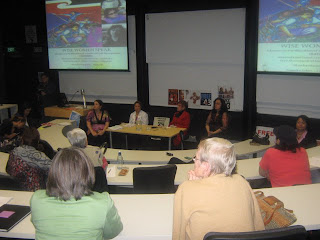 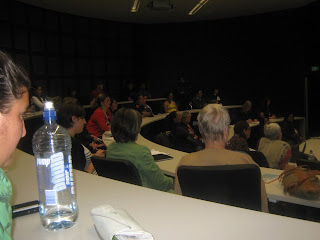