The March 2010 E Mau Ke Ea show is the third and final show that features footage from the UNFCCC meeting in Copenhagen, Denmark. Malia Nobrega attended and filmed the a few shots at the Global Day of Action as well as a meeting the International Indigenous Peoples Forum on Climate Change had with President Evo Morales from Bolivia.

We, the peoples of Earth:

gratefully acknowledging that Mother Earth gives us life, nourishes and teaches us and provides us with all that we need to live well;

recognizing that Mother Earth is an indivisible community of diverse and interdependent beings with whom we share a common destiny and to whom we must relate in ways that benefit Mother Earth;acknowledging that by attempting to dominate and exploit Mother Earth and other beings, humans have caused severe destruction, degradation and disruption of the life-sustaining communities, processes and balances of Mother Earth which now threatens the wellbeing and existence of many beings; conscious that this destruction is also harmful to our inner wellbeing and is offensive to the many faiths, wisdom traditions and indigenous cultures for whom Mother Earth is sacred;

acutely conscious of the critical importance and urgency of taking decisive, collective action to prevent humans causing climate change and other impacts on Mother Earth that threaten the wellbeing and survival of humans and other beings;

convinced that in order for communities of humans and other beings to flourish we must establish systems for governing human behavior that recognize the inalienable rights of Mother Earth and of all beings that are part of her;

convinced that the fundamental freedoms and rights of Mother Earth and of all beings should be protected by the rule of law, and that the corresponding duties of human beings to respect and defend these rights and freedoms should be enforced by law;

pledge ourselves to cooperate with other human communities, public and private organizations, governments, and the United Nations, to secure the universal and effective recognition and observance of the fundamental freedoms, rights and duties enshrined in this Declaration, among all the peoples, cultures and states of Earth.

(1) Mother Earth is an indivisible, self-regulating community of interrelated beings each of whom is defined by its relationships within this community and with the Universe as a whole. Fundamental aspects of these relationships are expressed in this Declaration as inalienable rights, freedoms and duties.

(2) These fundamental rights, freedoms and duties arise from the same source as existence and are inherent to all beings, consequently they are inalienable, cannot be abolished by law, and are not affected by the political, jurisdictional or international status of the country or territory within which a being exists.

(3) All beings are entitled to all the fundamental rights and freedoms recognized in this Declaration without distinction of any kind, such as may be made between organic, living beings and inorganic, non-living beings, or on the basis of sentience, kind, species, use to humans, or other status.

(4) Just as human beings have human rights, other beings may also have additional rights, freedoms and duties that are specific to their species or kind and appropriate for their role and function within the communities within which they exist.

(5) The rights of each being are limited by the rights of other beings to the extent necessary to maintain the integrity, balance and health of the communities within which it exists.

Mother Earth has the right to exist, to persist and to continue the vital cycles, structures, functions and processes that sustain all beings.

Article 3. Fundamental rights and freedoms of all beings

Article 4. Freedom of animals from torture and cruelty

Every animal has the right to live free from torture, cruel treatment or punishment by human beings.
Article 5. Freedom of animals from confinement and removal from habitat

(1) No human being has the right to confine another animal or to remove it from its habitat unless doing so is justifiable with reference to the respective rights, duties and freedoms of both the human and other animal concerned.

(2) Any human being that confines or keeps another animal must ensure that it is free to express normal patterns of behavior, has adequate nourishment and is protected from injury, disease, suffering and unreasonable fear, pain, distress or discomfort.

Human beings have a special responsibility to avoid acting in violation of this Declaration and must urgently establish values, cultures, and legal, political, economic and social systems consistent with this Declaration that:
(a) promote the full recognition, application and enforcement of the freedoms, rights and duties set out in this Declaration;
(b) ensure that the pursuit of human wellbeing contributes to the wellbeing of Mother Earth, now and in the future;
(c) prevent humans from causing harmful disruptions of vital ecological cycles, processes and balances, and from compromising the genetic viability and continued survival of other species;
(d) ensure that the damage caused by human violations of the freedoms, rights and duties in this Declaration is rectified where possible and that those responsible are held accountable for restoring the integrity and healthy functioning of affected communities; and
(e) enable people to defend the rights of Mother Earth and of all beings.

Article 7. Protection of the law

(1) Every human being has the right to be educated about Mother Earth and how to live in accordance with this Declaration.

(2) Human education must develop the full potential of human beings in a way that promotes a love of Mother Earth, compassion, understanding, tolerance and affection among all humans and between humans and other beings, and the observance of the fundamental freedoms, rights and duties in this Declaration.

(1) The term “being” refers to natural beings which exist as part of Mother Earth and includes a community of other beings and all human beings regardless of whether or not they act as a corporate body, state or other legal person.

(2) Nothing in this Declaration may be interpreted as implying for any State, group or person any right to engage in any activity or to perform any act aimed at the destruction of any of the rights and freedoms in it.

(3) Nothing in this Declaration may be interpreted as restricting the recognition of other fundamental rights, freedoms or duties of all or specified beings. 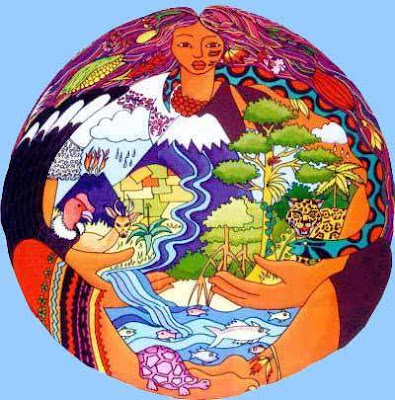 Clearly the charity exercised by people of Earth Mother is a distinction as rare as they who perform the arduous duties of exercising the fundamental rights and earthen values to protect Earth Mother. In degrees of which most non-accepting globalized captialist propaganda uses to weaken the hall mark of fractionalist divisionism so demanding of the trivalities of mankind as the depth of the deepest impact creates the catastropic damages upon natural landmarks on Earth Mother. Might it well go down in the history of Earth MOther the times when earth people as the connection to the skies and the spiritual descendants make concerted efforts to bring change. To our divine rights we seek always humble representations on our Earth Mother's behalf though it is known our Creators are on the living planet that feeds all who regardless have vision but cannot see. Ghinbraa-Djillanilliu