Petition: Appeal for the immediate release of USTKE trade unionists in Kanaky 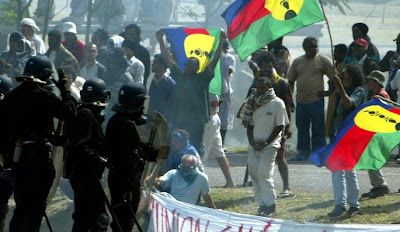 On June 29, 2009, in Noumea, Kanaky [also known by its colonial name of New Caledonia -– Kanaky is a colony of France] twenty-eight members of USTKE (Federation of Unions of Kanak Workers and the Exploited) were given prison sentences. Six of them, whose committal orders were read out in court, are now serving time at Camp Est, a prison which is already overpopulated. The judgement targeted the leadership of the union, particularly the president Gérard Jodar, sentenced to one year’s imprisonment, and the general secretary of the construction union, Michel Safoka, also given one year.

The official grounds for the guilty verdict are “hindering the flight of an aircraft”. On Thursday May 28, a day of action organised by USTKE, during a protest outside Noumea Airport to support Air Caledonia workers who had been fighting for two months against a wrongful dismissal, mobile police and the GIPN (Intervention Group of the National Police) pushed the unionists onto the tarmac. Twenty-eight of them took refuge in an empty plane to protect themselves against a stream of tear gas. At the time of the police intervention, there were no planes in circulation and it was the very action of the police which disrupted the demonstration.

The verdict is a political verdict against the pro-independence union federation. Those in power are trying to muzzle the territory’s foremost organisation for defending the rights of all workers, whether they be Kanak [the Indigenous people of Kanaky] or of other origins. In this far-away colony where there are no industrial tribunals, employees are often forced to lead long conflicts to assert their rights, faced with arrogant bosses who mock their dignity.

We refuse to accept either the growing criminalisation of union action or unionists’ imprisonment.

We demand the immediate release of the USTKE unionists and their leaders.