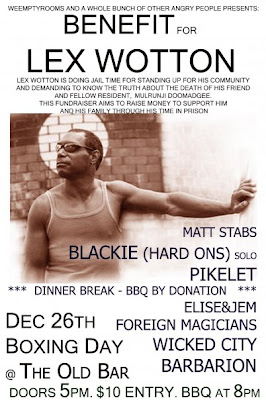 Upcoming benefit gig for Lex in Melbourne:
(organised by Weemptyrooms and A whole bunch of other angry people)

Lex Wotton is doing jail time for standing up for his community and demanding to know the truth about the death of his friend and fellow resident, Mulrunji Doomadgee. This fundraiser aims to raise money to support him and his family through his time in prison.

and check out to the right of this post a deadly web badge made by our brother The Angry Indian
Posted by Ana at 10:50