Laban Lap Dog for Neo Liberalism in the Pacific

This was reported on Radio Australia today, I guess that makes Laban a lapdog for neo liberalism in the Pacific, SHAME.

Scoop: Laban to attend PI Forum Trade discussions
True to form, the sellable face of spreading neo liberalism throughout the Pacific is sadly yet again Winnie Laban. She also recently headed a delegation of Pacific Island Businesses to Guam, and with Condalezza Rice visiting Aotearoa soon, what ever the administration NZ is firmly locked into supporting American hegemony in the Pacific. Don't believe the hype that that slave labour settler grubbyment are spreading about Trade in the Pacific, ours cousins across the ocean have told us about NAFTA. Here Jane Kelsey lays out what the implications of PACER & PICTA will be on the peoples of the Pacific. Time to get busy people.

The picture that emerges is deeply disturbing. As one NZ government official confirmed with disarming frankness: when it comes to trade there is no ‘special relationship’ with the Pacific. Effectively, international trade strategy takes priority over the views of Pacific governments and the needs of Pacific peoples.

This is not just a power grab by Australia and NZ for control of the South Pacific. As a World Bank report spelt out in 2002, PACER aims to lock the Pacific Islands irrevocably into the neoliberal paradigm. The link to the Pacific Regional Economic
Partnership (REPA) negotiations with the EU is partly defensive. But PACER and Cotonou are also flip sides of the same coin. Both swap preferential agreements for reciprocal ones that guarantee more extensive market access without having to
make any additional concessions. Both promise sensitivity to the realities of poor, small and vulnerable Pacific Islands, while they treat them as pawns to advance their global strategic game plan. Both reach beyond the rapidly expanding ‘trade’ agenda of goods, services, investment, competition and procurement to advance the Washington Consensus policies of the International Monetary Fund (IMF) and World Bank, including labour market ‘flexibility’, fiscal austerity and privatisation of
state assets and services. The broader and deeper the liberalisation, the more ‘structural adjustment’ will be required.

The Pacific was viewed as an inherited millstone - but one they were determined to keep under their control. As the multilateral regimes began to falter and a scramble for regional and bilateral deals accompanied the revival of US imperialism, Australia and NZ focused on securing their own small sphere of influence. The desire to recolonise ‘their lake’ now dominates their economic, political and military relationship with their Pacific neighbours. 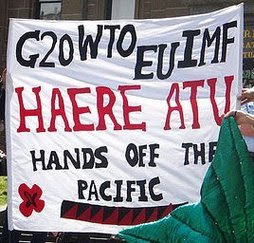 The report found the following, that the major impacts of globalization in the Pacific were, number one, rapid increase in extreme poverty; and number two, destabilization of governments. After decades of failed economic development and stagnant private investment, we see now the rapid rise of extreme poverty in the Pacific. 40% of the peoples of Vanuatu live in poverty. 48% in Samoa. Over 50% in Kiribati. “The Island of Hope” documented that the primary cause of poverty in the Pacific relates to globalization, and that this rise in poverty is interlinked with the adoption by national governments of liberal policies promoting investment and competition, and this has operated to the detriment of social services, including health, education, housing, and social welfare.

Native Hawaiian attorney, Mililani Trask, speaking at a forum sponsored by the International Forum on Globalization

Indigenous Peoples’ Resistance to Economic Globalization: A Celebration of Victories, Rights and Cultures

Pacific Island Affairs Minister and Associate Trade Minister Luamanuvao Winnie Laban has returned from a meeting of Pacific Forum Trade Ministers and senior officials in Rarotonga saying the meeting was a success in advancing a number of key issues.

"My comments to the meeting focussed on the importance of our discussions to progressing the Pacific Agreement on Closer Economic Relations (PACER) Plus, reflecting the need to build on a consensus between Pacific nations on the way forward - much in the same way as members of a waka must paddle together in unison to progress.

"New Zealand is an integral part of the Pacific and we want to ensure that progress is made to create an economic partnership that will strengthen trade and economic cooperation between all Forum members. Progress has to reflect the varying situations of all the member states, large and small."

Forum Ministers agreed that there should be an additional three consultation meetings over the coming months with a view to preparing the way to launch more formal negotiations. New Zealand offered to fund one of these meetings.

"With the benefit of a recently completed review, we reaffirmed the programme of work on trade facilitation (the Regional Trade Facilitation Programme). It was agreed that efforts should be made to enhance the effectiveness of the programme and that there is a need for a greater degree of accountability in assessing and reporting on outcomes."

Agreement was also reached on the continuing importance of maintaining the Forum office at the WTO, and benefits this offers all members. Funding options to maintain this office will be discussed with donors later in the year.

"The meeting has been successful and has continued to build on the excellent relationship we have with our Pacific partners," Laban said.