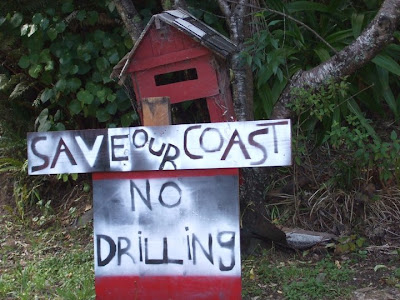 Te Whanau a Apanui has put out the call for a water-borne protest against Brazilian oil giant Petrobras's plans to prospect in the Raukumara basin.

Spokesperson Dayle Takitimu says vessels with links to the Nuclear Free Flotilla, Greenpeace, Forest and Bird, and Coromandel Watchdog are expected to be part of a flotilla leaving Auckland for Cape Runaway on Sunday in the hope of encountering Petrobras survey boats.

She says unlike some other iwi, Te Whanau a Apanui isn't interested in deals with miners.

“It's not about the money or greater ability to invest or joint venture with these companies. Whanau a Apanui just don’t want this activity occurring on our back doorstep when there is so much risk involved,” Ms Takitimu says.

She says all New Zealand is under-threat if there is an oil spill from the drilling.

Auckland, 23 March 2011: In response to a call to oppose deep sea oil drilling from East Cape iwi Te Whanau a Apanui, a flotilla of ships is to set sail from Auckland, for the East Cape, this Sunday.
Te Whanau a Apanui today redoubled their call for nation wide support in their opposition to deep sea oil exploration and drilling in the Raukumara Basin, East of their tribal lands off the spectacular East Cape of the North Island of New Zealand.

A number of groups have already committed to support the cause, including the Nuclear Free Flotilla, who intend to sail from Auckland this Sunday in protest.

Along with the Flotilla members, Greenpeace, Forest and Bird, anti-mining group Coromandel Watchdog, The Coal Action Network (CAN) and climate action group 350 Aotearoa have all promised their support. All are united in opposition to the Government’s current sell off of rights to drill for deep sea oil around New Zealand’s coast.

Te Whanau a Apanui spokeswoman Dayle Takitimu called on the whole country to support their stand, at a time when seismic surveying by Brazilian oil giant Petrobras is expected to begin off the Cape.
“We are resolute in our defence of our ancestral lands and waters from the destructive practice of deep sea oil drilling. This is an issue for all peoples of New Zealand and we call on those who support our opposition to stand with us in defence of what we all treasure,” she says.

As cheap, easily accessible oil supplies run out, the oil industry is opening up new frontiers in its global search for oil reserves. This includes the Arctic, and the areas of seabed the Government is selling off around New Zealand.

As BP’s Gulf of Mexico spill shows, deep sea oil drilling brings with it the very real risk of disaster. The Deepwater Horizon was working in 1500 metres of water. But depths in the Raukumara Basin, where Petrobras will be working, go as deep as 3000 metres.

“No one wants to see oil washing up on our beaches. A drastic spill would cost the New Zealand economy billions, and do enormous damage to our tourism and fishing industries, and our international reputation,” says Greenpeace Climate spokesman Steve Abel.

Daniel Mares, from the Nuclear-Free Flotilla, says: “Climate change, driven by fossil fuels like oil, is comparable to the nuclear threat in terms of its potential to drastically harm the quality and viability of life on Earth.”

Kevin Hackwell, from Forest & Bird, says: “We are very concerned at the potential damage to our marine wildlife of a Gulf of Mexico type oil spill, and this risk is all the more likely given that we do not have a robust regulatory framework around deep sea oil exploration and drilling.”

Aaron Packard of 350 Aotearoa commented that: “350 Aotearoa is clear that reducing emissions that result from fossil fuels, will not happen by drilling up more fossil fuels. Our continued ignoring of this will mean that the positive legacy we wish to leave will not be possible, and that our accruing carbon debt will continue to be passed onto our youngest citizens, and those yet to come."

The Government’s push to open up New Zealand to foreign oil companies was announced under the ‘Petroleum Action Plan’ in 2010, as part of a package of fossil fuel-based economic strategies that included removing ‘Schedule 4’ protection to parts of the conservation estate. Opposition to this culminated in a massive public demonstration in Auckland in May 2010, after which those plans were dropped.

A public send-off event will be held on the western side of Princes Wharf, downtown Auckland, to farewell the Stop Deep Sea Oil Flotilla on its journey to Cape Runaway (East Cape), on Sunday March 27, at 12.30 pm. Well wishers are invited to turn out in boats, or on foot, to support the send off at that time. All groups will meet at Cape Runaway on April the 2nd.

The public can also help ‘stop deep sea oil’ by going to: www.stopdeepseaoil.org.nz

most unfortunate that maori party aligned with colonial earth-rapist, greed-freak, national/key/hyde. what were they thinking?