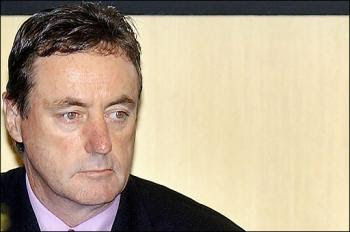 MICK Keelty, the Commissioner of the Australian Federal Police, protesteth too much

. And embarrassingly for him, his protests are becoming more preposterous and hysterical.

The most unpalatable element of his accusation this week that journalists have misinformed the public over counter-terrorism cases and undermined the judicial system is his shameless hypocrisy.

And his call for a media commentary blackout on the reporting of these cases until all legal avenues have been exhausted raises the question: on which hilltop does Keelty stand when he makes such demands of Australia's robust democratic institutions?

In Keelty's ideal world there would have been no public scrutiny of the Mohamed Haneef case, which collapsed spectacularly after the AFP and the office of the Director of Public Prosecutions made crucial mistakes — mistakes that were revealed by the media. The Indian-born doctor was charged last July with providing a mobile phone SIM card to a terrorist organisation. The charges were later dropped because of lack of evidence.

Let's refresh our memories over key events. There was the incorrect assertion that Haneef's SIM card was found in the exploded jeep at Glasgow airport. This claim was used to support the ongoing detention of Haneef.

The AFP knew the SIM card was not in the jeep when they laid the charges and they knew the prosecutor misinformed the court. The AFP did not immediately correct the mistake. In fact it did not seek to correct information in the public domain until the ABC revealed the SIM card was recovered hundreds of kilometres away in Liverpool — exactly where Haneef had left it. This was followed by Keelty's garbled comments about the SIM card being in "in the vicinity of London" and "still at Glasgow". His subsequent failure to entirely dismiss an Indian "dossier" alleging Haneef had links to al-Qaeda was plain dirty.

When charges against Haneef were finally dropped, Keelty tried to blame the DPP, saying police were obliged to charge Haneef on the prosecutor's advice. The DPP presses charges based on evidence put forward by the police.

Last year Keelty attacked the media for making police investigations difficult and he savaged Haneef's barrister, Stephen Keim, for leaking a transcript of the AFP's interview with Haneef. Everyone's to blame but him.

Then in a speech to the Sydney Institute this week, he attacked media manipulation of public sentiment, acting in the defensive manner of someone who believes he has no case to answer. The AFP has many media spokespeople and they all want to spin the news their way.

At least when Keim gave the transcript to The Australian, he owned up to it. He took responsibility.

But who has taken responsibility for the "secret information" about the case that police claimed could not be divulged — the innuendoes, smears and leaks that look suspiciously like they came from the police themselves?

In calling for the creation of a "society of editors" that police and intelligence chiefs can use to brief the media in an off-the-record forum to set matters straight, Keelty displays that he knows little of the competitive media environment. It would take only one editor to breach the rules, one leak to a blogger, one whisper in the wrong ear.

Keelty's boo-hoo-hoo antics belie the AFP's woeful record on the Haneef case. The cops got clobbered and they know it. Keelty just can't handle it, so he lashes out at the media because there is no one else to blame.

The saddest thing about this whole drama is that Keelty has a reputation for being a good cop. He is respected by many in the force and applauded for the AFP's expert handling of matters after the Bali bombings.

The AFP has done excellent work catching terrorists in conjunction with the Indonesian police. He was unfairly pilloried for stating the plain truth after the Madrid bombing when he said Australia's involvement in Iraq had made the threat of terrorist attacks worse, and he even got slapped down when he said climate change posed a threat to national security.

One might have expected, after heading the AFP since 2001, through some tumultuous times for Australia's crime fighting forces, that he might have been mentioned in this year's Australia Day honours.

Since the AFP failed to remain independent and above politics as Howard government heavies weighed into the Haneef case to exploit popular insecurities, it's hard to see how the AFP under Keelty is going to redefine itself.

And redefine itself it must, to some degree, under the Rudd Government, which has signalled that while it is not about to soften tough counter-terrorism legislation, it will broaden its national security strategy to include a new focus on social policy to build bridges with the Islamic community.

On the domestic terrorism front, things have been going awry for Keelty for some time. But sheeting the blame home to the media, the very same media that his spin doctors seek to manipulate, is unworthy of his office.

If he hasn't already lost it, he is on the precipice of losing the public's trust. Perhaps the time has come for Keelty to hand in his badge.

Sushi Das is a senior writer.