Australia in the Pacific Islands 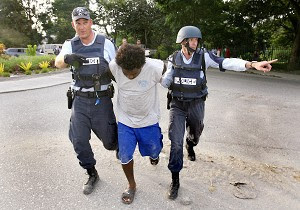 As well as major overseas deployments in Afghanistan and Iraq, Australia has deployed military, police and intelligence personnel closer to home - to Timor Leste and the small island states of the Pacific.

Since the late 1990s, Australia has deployed police, troops or naval vessels to Solomon Islands, Tonga, Papua New Guinea, Fiji and Nauru, and extended joint operations with New Zealand and other member states of the Pacific Islands Forum. The largest deployments include Australian involvement in the Regional Assistance Mission to Solomon Islands (RAMSI), the Enhanced Co-operation Program (ECP) to Papua New Guinea, and extensive operations by the Australian Federal Police (AFP).

The Nautilus Institute is developing a series of country specific sites (listed below) on Australian operations in the Pacific. However a number of police and military programs operate at regional rather than national level - thus "Australia in the Pacific Islands" includes briefings on a number of multi-country programs that operate in the region, such as the Law Enforcement Co-operation Program (LECP), the AFP's Pacific Transnational Crime Network, or the Pacific Patrol Boat Program.

About Australian Forces Abroad and Australia in the Pacific islands