Today marks the 3rd anniversary of the Police murder in custody of Mulrunji Doomadgee. When the Queensland government tried to cover this up, it was the uprising in Palm Island and the Murri campaign, that put political pressure on Chris Hurley to be tried in a court of law, and surprise surprise an all white jury let him off. The family however are pursuing a civil suit against Chris(Im a murder) Hurley and the Queensland gubbament.

Mulrunji is my Steve Biko, you are forever in my heart brother, much love to all the mob in Palm island today. You will never be forgotten. No justice No peace fuck the Police.

"A police officer landed the fatal blows that killed Mulrunji Doomadgee while he was in custody on Queensland's Palm Island, a coronial inquest has found.An autopsy report in 2004 found Mulrunji, 36, died from a ruptured liver and portal vein and had also suffered four broken ribs."I conclude that these actions of Senior Sergeant Hurley caused the fatal injuries.

"It's a terrible tragedy that such a minor incident can lead to a man's death in custody."

Accused riot ringleader Lex Wotton placed his head in his hands as Ms Clements read her findings to a Townsville courtroom. 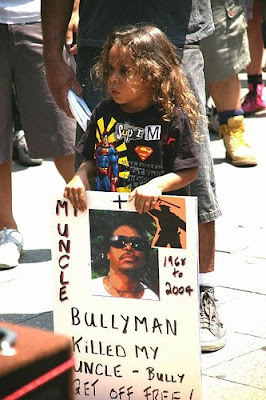 no justice = no peace