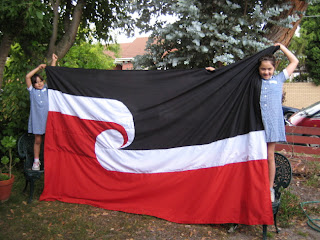 In the Kulin Nations, Waitangi day for the whanau started with our tamariki holding our Tino Rangatiratanga flag A beautiful testament to 168 years of our Haapu and its resistance and struggle against colonial rule.

Peoples from all struggles gathered outside the NZ settler consulate on Waitangi Day.

After a welcome from our elder Nan Old (Taranaki), Cheryl (ISJA) read the Aboriginal Trent Embassy Declaration, as peoples resident in Melbourne that support Indigenous struggle we wanted publicly acknowledge and affirm the Sovereignty of Aboriginal Nations in Australia. 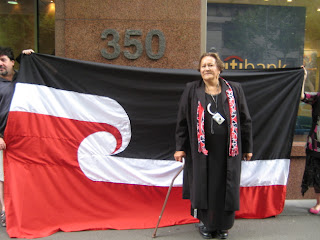 Sina read a statement from Te Ata Tino Toa, companera Tia Taurere, "The Tino Rangatiratanga flag symbolises the long tradition of struggle and resistance by Maori against colonisation and the Crown sponsored theft of Maori land and resources. It is a symbol used by Maori who continue to resist the pressures of colonisation and cultural and economic genocide. Such a concept embraces the spiritual link Maori have with 'Papatuanuku' (Earthmother) and is a part of the international drive by indigenous peoples for self determination."

Sina then set about shattering settler fairytales & mythology reminded the whanau gathered, that the Treaty of Waitangi still remains to be honoured 168 years after its signing. The NZ Settler Governments refused to sign the Declaration of the Rights of Indigenous peoples and the recent human rights abuses of the peoples of Tuhoe by nga poaka on behalf of the NZ settler state.

Just like the crap served up on here recently on stray alia Day, what is the nz settler state celebrating? We are definitely not celebrating our lack of, Tino Rangatiratanga, Mana Motuhake, Sovereignty or Self Determination. That’s for sure. 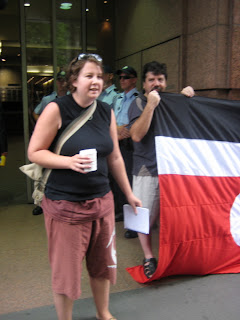 Rayna Fahey (Green Party, Radical Mamma, Pakeha Anarchist) then spoke about decolonisation and anti racism, affirming Indigenous rights is about human rights and respect, “ Respect for people and respect for our environment, and what it means to live up to treaty obligations as a settler. 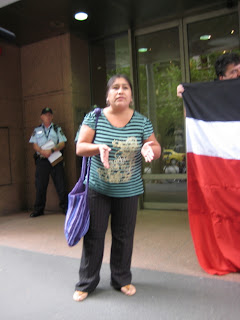 Marisol Salinas (Mapuche, Environmentalist) gave the solidarity of the Mapuche peoples for the Maori struggle for self-determination. The Mapuche are under siege by the Chilean state as they seek to defend heir lands from the greed of multi nationals and corrupt, racist governments.

Nick Chesterfield (Kaurna Nation) a seasoned campaigner for Indigenous rights in the Pacific, notably of late Nick’s mahi with West Papua has been inspiring. 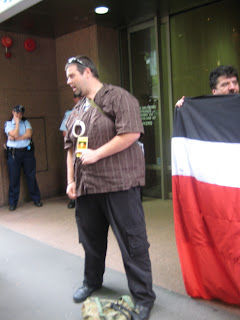 He gave an awesome korero about Aboriginal Sovereignty, Indigenous Unity in the pacific region and the challenges we face as we resist colonisation in the Pacific. 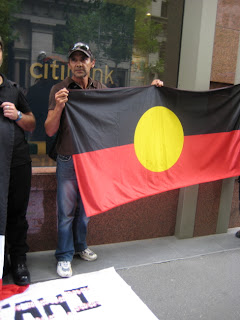 We were then honoured to have the Aboriginal Tent embassy represented by long time freedom fighter Robbie Thorpe (Krautungalung, Gunnai Nation) addressed us. “Land thieving, colonising, genocidal racists,.” This is invasion, and colonisation means for Indigenous peoples. He then reiterated how crucial it is for us to support each other’s struggles in the Pacific. . Robbie gave good serve against the four setter gubbaments and their refusal to affirm Indigenous human rights to Self Determination at an International level. Shame all right. 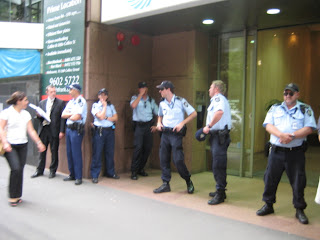 With a large Australian Federal Police presence Robbie reminded us that in the Pacific Australia and NZ & Amerikka are the biggest colonisers. Sina expanded on the role the AFP has in the Pacific and how the have built up over the past 10 years their presence in the pacific, they are a deployable paramilitary police group, resourced to the hilt. They are as Kevin Carmody sings, “ terrorists dressed in uniforms under the protection of their law”. The use of paramilitary police style repression & humans rights abuses in Tuhoe recently looks like part of an over all picture of state/police repression of Indigenous peoples thorough the Pacific at the movement. Are our human rights the price we have to pay in the Pacific for Settler, Trade & security agreements and arrangements? 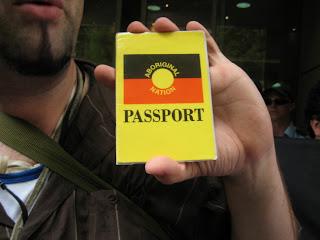 With the Mob converging on Kkkanberra for the opening of the Gubbament, Indigenous rights are gaining momentum both here and throughout the Pacific and the world. We are standing up, we are unified; there’s a change in the wind for sure. 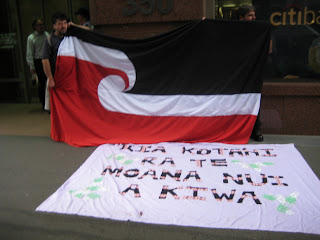 Kia ora Koutou
Greetings to all

To all Indiginous Cultures of the World, who are and have been deemed to the Colonial Rule of Economic Struggles and Oppression which has been and is being currently deem to Eradicate all Indiginous Human Right of Self Determination and Free of Choice

It is time for us all Worldwide to come together and be identified and make a stand,to support one another and make our independant Rights be Noticed and Heard.