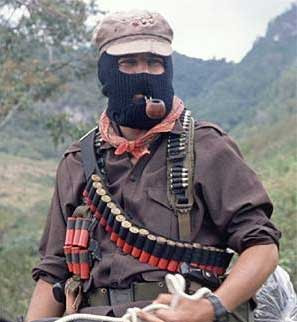 General Command of the Zapatista Army for National Liberation

---- To the People of Mexico: ---- To the adherents of the Sixth
Declaration and the Other Campaign: ---- Brothers and Sisters: ---- Compaсeros
and Compaсeras: The EZLN communicates to you the following reflections and
decisions we have made:

--- Chiapas ---- At this time, thestate government of Chiapas and the federal government (of the PRD-PRI and the PAN respectively) are waging a campaign against the Zapatista communities. "Official" evictions, paramilitary attacks, invasions sponsored by officials, persecutions and threats, have become once again part of the surroundings of the indigenous communities, the Zapatistas, who have set upon constructing their own destiny and improving their living conditions, always without losing their indigenous identity.

Just like in the worst times of the PRI, of Absalon Castellanos and "Croquetas" Albores Guillen, the PRD government of Chiapas is attacking the poor and needy, while catering to and benefiting the powerful. Just like any right-wing government, that of Juan Sabines in Chiapas continues the repression and dispossession, but now under a left-wing flag and with the double sponsorship of the two "presidencies" of our country: that of Felipe Calderon (of the PAN) and that of Andres Manuel Lopez Obrador (of the PRD, and, above all, of himself).

In contrast to other occasions, these aggressions have been met by the silence
of those voices that before rose to protest and to demand justice, and that now
fall silent, perhaps so that we are not reminded that they applauded AMLO's
support for Juan Sabines and his recent call to support PRD candidates for the
municipal presidencies and the local congress.

In this way, what we have been saying for the last 3 years has been confirmed:
above there are no principals nor convictions; there are, rather, ambitions and
conveniences. And another thing we said has also been confirmed: the institutional left is nothing more than a shameless right, a left rubber-stamped by the right.

The same crime has a different judgment: if the repression is carried out by the PAN, then one must mobilize and detain fascism; if its is carried out by the PRD, then one must lose one's memory, hush, do ridiculous juggling acts, or applaud. In Chiapas there is a real step backward in government policy. This time it does not carry the shield of the confessional right, but rather of the "modern" and "legitimate" left.

We will do what we have to do: resist. It does not matter if we have to do it alone. It wouldn't be the first time; before we became coffee-shop kitsch, alone indeed we were.

There are many aspects upon which to reflect, voice opinions, and take positions. This will be done another time another way. For now we just want to say that the determining factor in our country is not the supposed "neo-independence" of the legislative powers with respect to the media. Above, politics is the art of simulation, and the real agenda of organized crime (that is, of the government) is not demonstrated in the declarations of politicians.

What we want to say now has to do with the double effort, civil and pacific, which we are currently undertaking as Zapatistas: the Encounter of Indigenous Peoples of America, and the Other Campaign.

The first represents an event without precedent. Outside the official national and international circles, delegates and representatives of the original peoples of the American continent will come together to meet each other directly, to see and listen to each other. That is, to begin to respect each other. The fact that the encounter will take place in the besieged territory of the Yaqui Tribe in the Mexican State of Sonora symbolizes our permanent struggle to make ourselves visible and give ourselves the voice and ear that those above deny us.

The days 11, 12, 13, and 14 of this October, in Vicam, Sonora, Mexico, we will be represented as Indian Peoples, to whose brown blood we have added the color of the Zapatistas.

With regard to the Other Campaign, it represents for us the only serious effort to construct a national movement from below and to the left.

It is interesting that those who before criticized this effort now use the same words that we have used to refer to the political class, to the necessity to listen and to organize from below.

As a sign of our commitment to those who are now our compaсeros and compaсeras, in addition to carrying out encounters in our own territory so that they may know us better, we regularly send one or more delegations of the EZLN out to visit the places where others struggle in order to know them better.

Thus we made a first journey throughout all of our country, and now that we are making an outline of a national plan of struggle, with the feeling and thinking of all those who form the Other Campaign, we have made a second visit to the north of Mexico.

As we have done on other occasions, each time that we leave our territory to visit other parts of our country, the EZLN has addressed the existing political-military organizations in order to respectfully ask them not to carry out actions that could endanger the life and liberty of our delegates in their civil and peaceful work.

These are organizations with which we maintain differences in formation, structure, method, analysis, and history, but we recognize and respect them. Their existence and persistence, like ours, is due to the grave living conditions of our people and the lack of spaces for political participation and struggle. Currently, one of these revolutionary organizations, the Popular
Revolutionary Army (EPR), is carrying out a political-military campaign to demand that two of their companions in struggle be returned alive.

The demand for the appearance of these disappeared is not only legitimate, it is also a denunciation of the current dirty war that that adoring lover of military uniform, Felipe Calderon Hinojosa, is re-editing for the present.

As Zapatistas we think that we can not ask of the Popular Revolutionary Army that they permit our delegation to travel through the territories where it has presence or influence and to declare a ceasefire and suspend the campaign that it maintains with the just and legitimate demand for the presentation of its disappeared.

On the other hand, the nervous stupidity of those in charge of the official repression has become more acute with the recent actions of the EPR, and it could be, if the leadership of the Popular Revolutionary Army was to generously agree to a ceasefire so that our delegation could carry out its work, that the military government of Felipe Calderon would launch an attack and later
PRETENDER ADJUDICARLE LA AUTORНA AL EPR ARGUMENTANDO DISPUTAS INEXISTENTES ... arguing inexistent disputes.

For these reasons that we have here tried to synthesize as much as possible, we have decided the following:

First. The Sixth Commission of the EZLN will suspend the journey of the second phase of the Other Campaign to the states and regions of the center and south of the country that it had announced for the months of October, November, and December of 2007. In its place, we will carry out civil and peaceful actions in defense of the Zapatista Communities.

Second. The EZLN will comply with our commitment, as part of the organizing commission, to attend the Encounter of the Indigenous Peoples of America. A delegation of Zapatista leadership will travel precisely for that purpose to the territory of the Yaqui Tribe in Vicam, Sonora, Mexico, October 11, 12, 13, and 14, to be present in this important meeting, key for the future struggle of the original peoples of our continent.

For the Indigenous Revolutionary Clandestine Committee—General Command of the
Zapatista Army for National Liberation.

Sixth Commission of the EZLN

From the mountains of the Mexican Southeast

Subcomandante Insurgente Marcos.
Mexico, September of 2007
Posted by Ana at 20:24