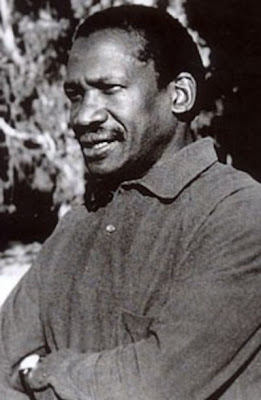 This post is in honour of the passing of my brother & comrade Ridwan Lahers' father Ahmed Laher, read Ridwans moving tribute to his father here. Arohanui.

Robert Mangaliso Sobukwe belonged to that rare breed of men, like Kwame Nkrumah, Julius Nyerere, Amilcar Cabral and Nhamdi Azikiwe, who believed deeply in the possibility of achieving a renascent Africa.

Their beliefs transcended narrow national borders to embrace a vision of a continent and its diaspora. A lay Methodist preacher, academic, intellectual and consummate political strategist, Sobukwe combined the fiery oratory of a preacher with the discipline of an academic.

He understood that pass laws were enacted to circumscribe the lives of black people and to reduce them to mere cogs and wheels in the machinery of oppression to generate wealth for the white minority.

In conceiving the positive action campaign that led to the massacres in Sharpeville and Langa, he understood that the conquering the fear of arrest and of prison was at the door to the emancipation of the African mind.

For Sobukwe, the PAC was part and parcel of the winds of change that were blowing across Africa and part of the stampede to freedom that could not be halted, as stated by the then British prime minister, Sir Harold Macmillan.

Slogans like Izwe Lethu I-Afrika, Forward then to independence, to independence NOW! And tomorrow, the United States of Africa exemplify the vision of a renascent Africa.

In his valedictory speech in 1949 as he was leaving Fort Hare University, he made allusions to the notion of the African renaissance. He urged his fellow graduates to go back to their communities and help them develop. He recognised early on the need for “organic” intellectuals if Africa was to be reborn.

He believed in the motto: Service, Sacrifice and Suffering, Strategy, Structures and Systems to combat oppression as opposed to self-seeking, self-delusion and self-enrichment.

Sobukwe combined humility with defiance of injustice. He was always respectful of others and appreciative of the good others had given to him.

That it was to take up the history and heritage of defiance, innovation and to realise a land where citizens would be free, secure and ready to redress the evils of the past, to reposition Africa in world affairs and to strive for moral renewal. For him an African was anyone born and bred in Africa and owed their only allegiance to Africa.

There is no better tribute to Sobukwe than the one by AP Mda, one of South Africa’s greatest intellectuals. Mda’s assessment of Sobukwe, whom he mentored in the early phases of the ANC Youth League, comes in seven succinct points all pointing to his humility, clarity of mind and vision and deep affinity with the downtrodden.

He found him to be “totally free of any tinge of racism or anti-whiteism but inflexibly opposed to white domination”.

Sobukwe was very clear in his mind that laws made ­exclusively by whites to dominate black people could not be just.

He knew any power that positions, fixes or frames others; that names provinces, mountains, rivers, streets and airports after its own leaders and obliterates the names of heroes of the land was narrow minded.  How ironic that our new dispensation has taken a leaf from the apartheid warlords not to honour Sobukwe, Rosett Ndziba, AP Mda, AB Ngcobo, ZB Molete, the charismatic Josias Madzunya and others.

As we speak and dream of the African Renaissance let us remember Robert and Veronica Sobukwe and all those silent heroes known only to their immediate communities who contributed to the struggle in the spirit of service, sacrifice and suffering.

Ntuli is an independent political and cultural analyst.

Ana thank you ever so kindly my dear sista. You have touched my heart with this tribute to my dad.

My mother and I thank you and wish you peace and blessings.

Was glad to read this as well from the other side of the Atlantic. We are often presented with a very simplistic view of African issues by the white media. Mandela is touted by the west as a Saint and infallible hero of Africans(something which stirs automatic suspicion. Encountering voices such as that of Mr. Sobukwe and Biko adds greater complexity to our understanding of South Africa(Azania). I was wondering where one can access the writings of Mr. Sobukwe or more about the complexity of the struggle against apartheid which factors in greater balance. (Also looking for online resources on Nnamdi Azikiwe

Hi , thanks for sharing your information. If you are interested in politics, first you should know about POLITICAL STRATEGIST, then you can start your career in POLITICS.
Best Political strategist in india
political science courses In india
top election management services in india

Thanks for your blog. If anyone want to know about political related company, courses, career etc, this company will be the rightchoice for you.
Election Consultant India
political marketing agency
political communication courses