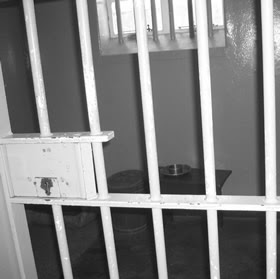 During the election in nz last year a lot of activists I talked too we concerned that if the Maori Party went into government with the national party that they would tactically support their draconian law & order policies. The last few days have proved us right. We have seen :

The Maori party is dressing this up as some sort of Rangatiratanga & economic opportunity is disgusting and makes me sick. We all know that our people already disproportionately fill the prisons; we all know that during hard economic times crime flourishes but don’t worry, stupid red neck laws and politicians & media milking law n order hysteria will keep these prisons full for sure. Gangs & criminals have been demonised so much in Aotearoa, and it’s easy to throw people into prison that society has walked away from.

That corporate Iwi are putting their hand up to make a buck out of the expansion of prison industrial complex in Aotearoa, is kupapatanga gone crazy. Hello managing a contract is NOT Political & Economic independence. Is this the price that grassroots Maori continue to pay as the forgotten rubbish of structural adjustment, to be dealt to & to be kept in line by our own? Pohara whanau haven’t recovered from the extremist economic ‘reforms of the eighties when " an entire generation of New Zealand’s children and youth has suffered under the reforms launched by the Labour government of 1984-90. It concluded that Maori and Pacific children in particular have been “disproportionately affected” by growing inequality and levels of poverty."

Treaty settlements distracted us from our struggle, when our grassroots whanau were going to the wall.

Turia’s tacit support of the prison at Ngawha, undermines and tramples on the fight that the peoples of Ngapuhi engaged in against the prison. That prison was Wira Gardiners pet project, and no doubt will be used as a model to trample on other Maori Sacred sites and communities.
I can’t think of anything more offensive than to be held under lock and key by your own, and maybe on your own whenua. Then being force feed you culture by Maori who wouldn’t even give you the time of day on the outside .

Our so called leaders are more interested in making money than the human rights of our most marginalized & vulnerable. What’s next, an intervention in South Auckland? 300 more police is an insult to that community, where is the support from our leaders for Whaea Leanne & her whanau? It seems the support from our community is conditional on you being a ‘good’ Maori, not a pohara urban one. How disconnected from the reality of the vast majority of Maori is that? Look out for future announcements of privatising welfare to pricks like John Tamihere.

Tamihere used the occasion before the well-heeled audience to call for the privatisation of social welfare. He said that beneficiaries were getting “something for nothing”, and that this was eroding their “self-worth”. “Welfare in New Zealand is delivered in a charitable and benevolent way and that charity and benevolence actually crushes you because it teaches you to put your hand out,” he claimed. Beneficiaries should, he moralised, accept “obligations” in return for “state support”.

According to Tamihere, the Department of Work and Income (Winz) should assess beneficiaries’ entitlements and then pay the money over to private trusts—such as the Waipareira Trust, where he was the CEO before entering parliament. The trust would work out a budget for each beneficiary and pay essentials, including rent, power and basic food items, rather than “handing over the money for them to spend at will”. Only residual money would be transferred into a bank account for “discretionary” spending."

That's so much like the intervention in the NT its not funny.

Its hard not to feel that they are pissing all over tino rangatiratanga for the opportunity to heard & control our people at the bottom of the heap, Malcom X had a good term for that.

The utter devastation wrought on Maori communities by neo-liberalism is a non-issue, apparently. The Maori Party is quickly and clearly demonstrating the bankruptcy of the colonial state in achieving any real change for Maori, and its commitment to following the same orthodox and fruitless methods of parliamentary reformism that have largely dominated Maori politics for the past 20 years.

Which means, government’s & our leaders don’t give a shit. Continually looking to the government & the Maori establishment for answers & justice is a highway to hell. Our people collectively have the power to determine our own destiny, real lasting Tino Rangatiratanga will only happen and be meaningful & be lasting, when it comes from below.

Grassroots Maori Communities can in these times have the wherewithal and strength to challenge this latest onslaught of state oppression directed at them. Look out for a cop watching crew in a hood near you. It has come down to that, we have to look after each other and get organizing our communities to bring power back to the people where it belongs.
Posted by Ana at 11:32

My cousin recommended this blog and she was totally right keep up the fantastic work!