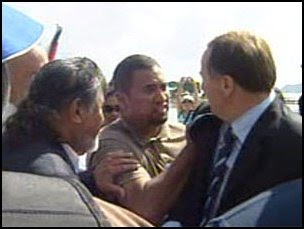 a guest commentary I wrote for Socialist Aotearoa dedicated to  John & Wikatana Popata
The National/Maori party honeymoon was smashed on Waitangi Day. The brave actions of two young warriors definitely dispelled the pro government propaganda that the National and Maori Party were desperately trying to cement on Waitangi Day. Mrs Harawira’s reaction is complete hypocrisy. Each generation has a right to oppose their oppression. Just because some are sitting at the table with or holding onto the arm of the oppressor that gives them no right to crush dissent when it doesn't suit their own political purposes. Whether our Maori leader’s or Maori elite like to admit it or not there is a groundswell of anger and disappointment that our grassroots have been sold out, again, and wait to get kicked in their teeth by their own.

When you add up the combined impacts of the “90 Day fire law”, the changes to the RMA, changes to bail laws, the privatisation of welfare, prisons, water and the ongoing impacts recession has on our communities. Our flax roots have every right to be angry.

The Maori Party is a right wing party, make no mistake about that. Hiding behind the rhetoric of advancing all Maori, they have shown that they are willing to sacrifice the vast majority of Maori for the enrichment and advancement of a few. Our so-called Maori leaders were unwilling to even discuss huge unemployment amongst our people at Waitangi, yet jump at the chance to be involved in privatisation. These neo tribal capitalists are transparent in their greed and their neoliberal modus operandi. These elements have much to gain from the privatisation of public services and their turning over to Maori business interests in the name of “self determination”.

This is exactly what was intended way back when the treaty settlement process & fiscal envelope were touted and subsequently implemented. Maori have already been kicked in the guts from the recession; disproportionally we have already the highest percentage of recently unemployed. Turia’s prescription for recently unemployed Maori is to study as a way to ride out the recession, which is patronising and out of touch as you can get. Expect to see more of the same as nowadays it seems you are not a real Maori if your a worker, gang member or on a benefit.

The Maori Party has already started to demonise other Maori that don’t “fit with the program”. This is a ploy to soften up and slam into our own disenfranchised & dispossessed and to squash dissent by Maori to the National gubbaments agenda. Our elite will gladly take up the role of the native police to keep the more rebellious and those resentful of these polices in line. At the end of the day, the mokopuna of Roger Douglas will have their say. The mass of our flax roots, our workers, our youth, our gang members and all our whanau at the bottom of the heap struggling to survive. We are the sleeping taniwha that will rise up and take back the future that our Leaders & elite have already sold. 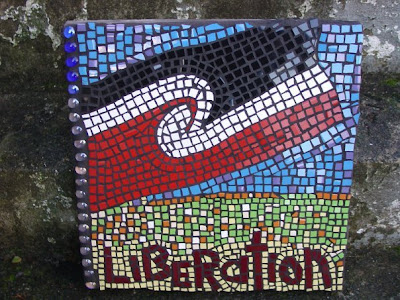 "Warriors"? Ha ha - you mean those fat dumb black cunts. Fucking Maoris - I hate them all

John Key was democratically elected, and these two thugs should have shown him the respect he deserves as the leader of this country. You don't do yourself any favours by calling them brave warriors. Brave for what? Trying to rough someone up? Doesn't take balls at all. They are just pussies.