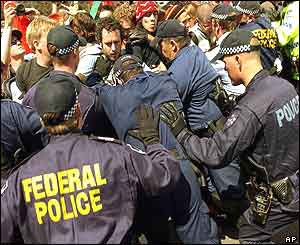 In the lead up to the Sydney APEC summit in 2007, the New South Wales State Government passed totalitarian legislation to prevent"control" protests. A key part of this legislation was an "excludable persons list", composed of people who "who would pose serious threats to the safety of persons or property (or both) in an APEC security area". Despite a presumption of publication in the law, exactly who was on the list was a secret, but the NSW state police gave the usual assurances that they were all Very Dangerous People - practically terrorists - with a clear intention to act violently, and that the law was there to Prevent Total Mayhem.

They lied. The Sydney Morning Herald has now obtained a full copy of the list under freedom of information laws, and while it had the names redacted, many of the people on it could be identified. They were exactly who you'd expect: university students and Greenpeace activists. Over half had no criminal record, and yet were deemed by the Commissioner of police to be "serious threats" to public safety. The opinion of one former police officer (and now university academic) sums it up perfectly: "pure unadulterated bullshit". Rather than being threats to public safety, these were simply people the police did not want to protest. And so, with the collusion of a craven legislature, they silenced them, stripping them of their right to free speech on purely political grounds.

This is why we should never allow the police such powers: because they will abuse them, and in doing so, undermine our democracy. And its a perfect example of why Australia needs a Bill of Rights Act - to prevent this sort of abuse from happening again.