Stand up for Aboriginal rights 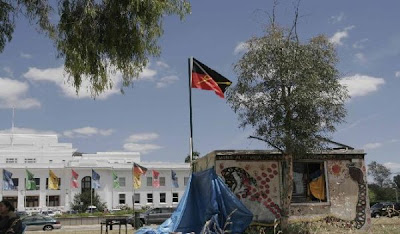 Stand up for Aboriginal rights on the first day of the new gubbament.

March to Parliament for 1pm rally

Mobilise for reinstatement of the Racial Discrimination Act

Implement the UN Declaration on the Rights of Indigenous Peoples

How to get there!

Buses will be leaving from the Block, opposite Redfern Station, on Tuesday 12 February. Get there at 7a.m. for 7.30am departure.

If you are interested in going down to Canberra on Monday 11 Feb, let us know that as well. Bus times for Monday are still being confirmed.

Initiated by the Aboriginal Rights Coalition, Sydney. Come to the meetings 6pm every Monday at Redfern Community Centre, Hugo St.

Endorsements from Aboriginal leaders include:

Happy New Year to you Ana. Good to see you running here again.