The struggle goes on 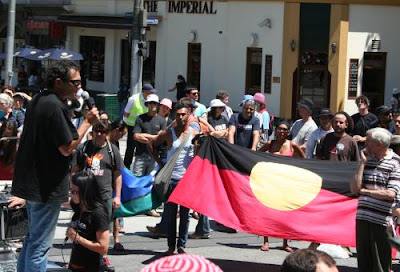 The referendum was a result of “a lengthy and massive campaign generating public awareness and public enlightenment fought by Aboriginal and Torres Strait Islander people and our white allies right across Australia”.

Watson explained the importance of the 1960s for the Aboriginal political struggle. “That entire decade was a time of incredible political energy, when Aboriginal political leaders right across Australia were able to reach out and connect with non-Indigenous friends and comrades across the working-class community of Australia.”

He said that during that decade, “Aboriginal political leaders formed real and lasting friendships and alliances with the trade union movement, the Australian Labor Party, the students, the Christians”.

“Looking back over the four decades, we can say we established strong community service networks across Australia: medical services, legal services, housing services and employment programs.”

“We still have the highest imprisonment rate. Even though this year is the 16th anniversary of the release of the Royal Commission into Aboriginal Deaths in Custody report, Aboriginal deaths in custody are increasing. The police and the courts and the jails are still conspiring to squash the rights and civil liberties of Aboriginal people.”

GLW also spoke to Victorian Koori activists who were dubious of the benefits of the referendum. Indigenous and trade union activist Greg Fryer, citing examples such as the denial of Aboriginal land rights and the “uproar when a police officer who killed was actually charged” on Palm Island, argued that the referendum “hasn’t improved our quality of life. Things like infant mortality and life expectancy remain Third World regardless of what government’s in power. I was actually born not a citizen of this country but there’s not a great deal of difference.”

He said that there had been a “huge regression since the Howard government came in”, with PM John Howard’s conservative values being reflected in his government’s “mission mentality” towards Aboriginal affairs.

Fryer says the referendum today seems “almost like a futile exercise … Was Australia just going through the motions to save face internationally?”

Robbie Thorpe from the Black GST said there had been “no improvement over the last 40 years. Things have gone backwards. Aboriginal people don’t want to be citizens, they don’t want to vote for these people.” Since 1967, there has been “a whole raft of legislation that has had a negative effect on Aboriginal people”.

Thorpe said the underlying issues haven’t been dealt with and that “No government — Labor or Liberal — is going do anything positive for Aboriginal people”. What the referendum created, he argued, was “an industry that lives off the misery of Aboriginal people”.

However Watson emphasised that “the struggle goes on”. He said it is critical that this year, “Aboriginal people across Australia honour the legacy of 1967 and honour the contributions and courage of our elders who led that struggle by seriously evaluating the weight of their vote in the forthcoming election.

Excerpts from a recording by Melbourne Indymedia, of Robbie Thorpe's speech to the protest and march on Invasion Day (Australia Day/ Survival Day) outside the Victorian Parliament House. A strongly worded speech about the ongoing undeclared war and genocide of aboriginal people.