KEY US OFFICIAL URGES KIWI PACIFIC ENTREPRENEURS TO BE PROACTIVE

Auckland 6am: A key official in the US Government is urging New
Zealand based Pacific entrepreneurs to seek out business opportunities
in Pacific nations affiliated to America.

David Cohen is attached to the office that oversees the Pacific States
under the US, and is here for the Pacific Futures Trade Conference in
Auckland.

Cohen says there isn't a free trade agreement between New Zealand the
US, but that shouldn't stop Kiwi Pacific businesses.

Cohen says there's billion dollar opportunities in Guam, for example,
with the US relocating its military base there from Japan.

The president of the New Zealand Pacific Business Council, Gilbert
Ullrich, says they've already started to lock down on places like
Guam.

Ullrich says there are two key areas that New Zealand companies can
move into that'll take them into places like Guam and Hawaii, where
the opportunities are. 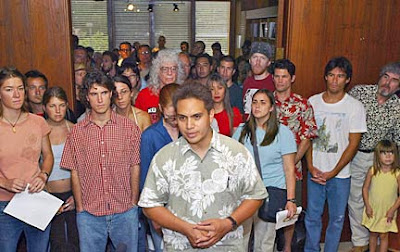 Our brothers & sisters in Guam & Hawaii would disagree with this US
bullshit completely.

Email ThisBlogThis!Share to TwitterShare to FacebookShare to Pinterest
Labels: Guam, Hawaii, Nuclear free and Independant Pacific, US Hegemony, US Repression