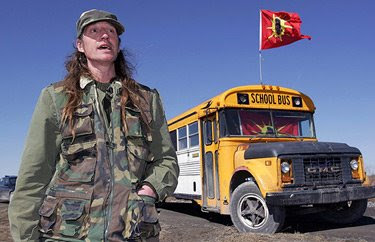 Choppers flying overhead. Low flights over our heads at Culbertson Track and the quarry. On the water there a dozen OPP surveillance boats.

Apr. 22, 2008. Last night the non-native Deseronto squatters, whose town is on Tyendinaga Mohawk land along the Bay of Quinte, made human chains along the road leading up to the demostration. They held up signs for the Mohawks to see, with messages, like “power to people [themselves]” “Remove your masks” and “You are a disgrace to your race”. Pictures available. Are they copying us or what? They get the tactics but not the principle! Band council chief R. Don Maracle distanced himself from the blockaders saying “Blockades are not the way to settle land claims. it takes time to resolve these issues. They need to remain calm to allow [me] to negotiate peacefully in a climate that is not hampered by protests and blockades”, he told the local radio station. His treasonous comments set us up for the colonial attack that followed. R.Don Maracle is wrong. One, a negotiator needs to be picked by the people for the purpose. You can’t assume the right to negotiate because you’ve been elected to a colonial band council office who function on colonial capitalist brains. You are not legal! Two, negotiations have to be in public to meet the requirements of both Haudenosaunee Law and international law. Agreements cannot be the result of the informed consent of the people if the people have not been informed. In camera closed door negotiations are not legitimate.

The land in question is the Culbertson Track of 1832 which was never given up. The Ontario government knows full well that there’s a problem with squatters on the Tract since 1832. How long do they expect us to wait for them to uphold the law. The roads trespass on our land. It’s our land. It’s our business where we stand on it. The OPP, the squatters, the trucks carrying toxic waste to the quarry and the construction crews are all trespassers. The illegal colonial governments and agents defame us by accusing us of saying we’re the law breakers instead of doing their duty to protect to us from their unruly law breaking people. Why are the cops breaking the law? The squatters roamed around all night shooting verbal threats left, right and center, “You better take down your blockade or else!”, with the OPP standing behind them probably setting them up and urging them along. The OPP are following the same “Whiskey Trench” tactics used by the SQ during the Mohawk Oka Crisis of 1990 at Kanehsatake and Kahnawake. They’re just standing there watching as their citizens break the law. By doing this they are encouraging them to act like rabble. What needs to happen in a proper democracy is that the legal rights and principles have to be set out and recognized by all responsible parties. In keeping with the requirements of both international law and the Great Law of Peace/Kaianereh’ko:wa, we have set out our rights.

The British Crown agreed to recognize and protect our right to our land on the Culbertson Tract. Ontario has not set out its rights. It has provided no legal authority for its claims. Instead it’s using armed force to support those who would violate the law. This is totally dishonorable behavior. This isn’t the 19th century anymore. When are Canadians going to leave colonialism behind? It’s been formally recognized as illegal for almost a century now. They should know by now that their strong arm strategy to wear us down and scare us into submission by defaming us and our ancestors just won’t work. We have been unwavering since the time of first contact. We never agreed to be British subjects. We never became Canadian citizens. We never agreed to accept the injustices that have been visited upon us. We will continue to ask questions about their illegal actions. We will overcome this nonsense. The Rotiskenekete did take down some of the blockades last night in good faith as we feel we had made our point about the fraud that is taking place. The condominium construction on the Bay of Quinte is illegal. Ontario should stop feeding into the scam artists who are trying to use us to extort cash pay outs out of them.

They should simply uphold the law and evict the squatters. Succumbing to these tactics is unfair to Ontario tax payers. When the Deseronto squatters started attacking us, it was left to the Mohawks to defend ourselves and our land by putting the blockades back up. The OPP should have been cooperating with these efforts to ensure the safety of everyone. The OPP came in yesterday morning and set up a perimeter further out. This morning at 8:00 am they moved closer. The OPP came to every area where there was a Mohawk blockade pushing threats from OPP Headquarters that they are “coming in” and “taking us out”. Constables Ron Van Straalen and C. Flynn of the OPP at Napanee Detachment are in charge [613-354-3369, Fax 613-354-9183]. We had 4 sections blocked. The roads are open, #2 highway going through Deseronto to Napanee. Emile Neibourg, the real estate agent created this situation. He is trying to extort a pay out from Ontario by threatening to build condos on our land. Caught on video was the police saying, “We know that he created this to deal with this land issue”. Then he can help Canada say, “We don’t have any money to pay the Mohawks for the disruption of their land, or to relocate the Deseronto squatters. We gave it all to Mr. Neibourg. The OPP has become a tool of corporate corruption. They’ve been turned into a private army of the opportunistic scumbags who will stop at nothing to line their pockets. To our brothers and sisters, “We need help. Pressure the OPP and the governments of Ontario and Canada to stop the violence and stop the corruption on sovereign independent people. Nobody has spoken to us.

They just came in and attacked. Is this the new OPP protocol? These OPP look like they are itching to converge on us at the quarry and take us out. They want to try out their new Faschist Fantino tactics. Their ultimatum is, “get out of here!!” They know we are right. They refuse to talk to us. Ontario citizens should be asking why their government is letting itself be used for this organized thuggery.