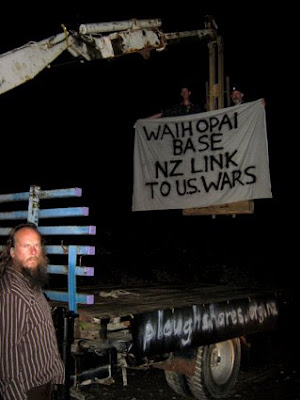 Statement Of The Waihopai ANZAC Ploughshares

They shall beat their swords into ploughshares, their spears into pruning hooks; nation shall not lift sword against nation; and there shall be no more training for war. Isaiah 2/4

This morning, 30 April 2008, we entered the Waihopai Spy Base near Blenheim. Our group, including a Dominican Priest, temporarily closed the base by padlocking the gates and proceeded to deflate one of the large domes covering two satellite dishes.

At 6am we cut through three security fences surrounding the domes - these are armed with razor wire, infrared motion sensors and a high voltage electrified fence. Once inside we used sickles to cut one of the two 30-metre white domes, built a shrine and knelt in prayer to remember the people killed by United States military activity.

We have financed our activities through personal savings, additional part-time employment and a small interest-free loan from one of our supporters.

We are responding to the Bush administration’s admission that intelligence gathering is the most important tool in the so-called War on Terror. This war will have no end until citizens of the world refuse to let it continue. The ECHELON spy network including Waihopai, is an important part of the US government’s global spy network and we have come in the name of the Prince of Peace to close it down.

The base is funded by New Zealand tax payers and located on New Zealand soil which makes New Zealand a target through our association with the UKUSA intelligence cooperation agreement.

Five years ago the Clark government opposed the US-led invasion of Iraq. Yet at the same time the Bush administration was using the National Security Agency’s ECHELON system, of which Waihopai is an integral component, to spy on UN Security Council members so it could more easily swing them in favour of an invasion.

There have been over 100 Ploughshares actions over the last twenty years around the world. Ploughshares direct actions are linked through the common factors of: entry to locations connected to military activity, Christian prayers and most involve some form of property destruction.

About Waihopai and ECHELON

Green MP Keith Locke is quoted as saying that the base has cost New Zealand up to NZ$500million since 1989. The base intercepts electronic communications throughout the Pacific region including New Zealand and is often staffed by personnel from US agencies.

In 1996 researcher Nicky Hager published an expose on Waihopai and New Zealand’s strong links to the USA-led ECHELON network of six similar spy stations around the world. The United Nations launched an investigation in 2003 to claims that ECHELON had been used by the US government to eavesdrop on UN diplomats and Security Council members. A report published in 2000 showed that ECHELON had also been used by the US to gain commercial advantage for US corporations.

Information gathered at Waihopai is transferred to the Government Communications Security Bureau (GCSB) in Wellington and fed unseen directly to Washington DC.
Posted by Ana at 10:39