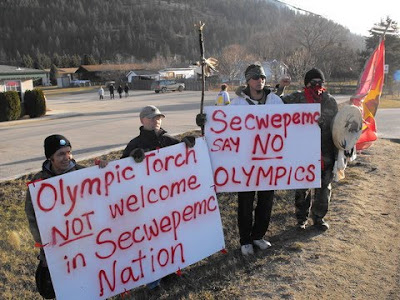 Secwepemc have a long standing fight with the government of KKKanada and british kkkolumbia because of the fight for Secwepemc Land and Freedom.  Secwepemc have never signed treaties or they have never ceded or surrendered their Secwepemc Nation.  Secwepemc say NO to the BC treaty process, the modern day treaty wants get rid of the Native Peoples and take control of the last remaining lands and water (so-called resources) from their Territory.

Historic Dispute with Olympics
Secwepemc Land and Freedom Fighters travelled to Europe in 2002 to hand deliver a formal submission to the International Olympic Committee and let the IOC and the World know that the Olympics is not welcome here in so-called KKKanada, because of the long standing Indigenous land dispute and continued violations of Indigenous and Human Rights.  KKKanada does not permission to be here and is currently illegally occupying Indigenous Nations.

Where ever the Olympics sets foot they wage war on the Earth and the Indigenous Peoples.  No Olympics On Native Land.

Native Youth Movement Says:
The Olympics and KKKanada is using it's global spotlight to market our Indigenous Territories for sale, but we want the World to know "OUR LANDS ARE NOT FOR SALE."  KKKanada is here illegally and "This is all Native Land".  This is simply not just another "issue", We are fighting for our Freedom to continue to exist and live as true Secwepemc on our Lands without any foreign invader occupation on our Lands.  Major corporate sponsors like Coca-cola and RBC (Royal Bank of Canada) are destroying Indigenous Territories all over the World, including the Tar Sands (the most destructive project in the history of humanity).  We are now in the IV World War, the war against the Earth itself.

We stand in solidarity with all Indigenous Peoples fighting for their Lands and Freedom Worldwide.

http://nativeyouthmovement.org
Posted by Ana at 11:59