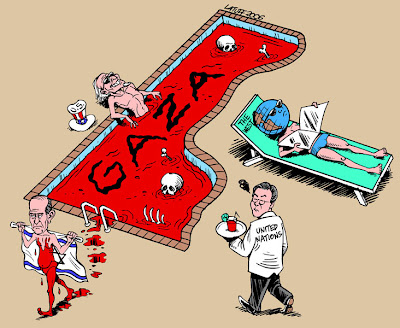 'Jerusalem will remain the capital of Israel and it must remain undivided.' -- Barrack Obama

'I've been to Gilo and seen the security fence protecting Israeli families from attacks in their own homes.' -- Hillary Clinton

'When I heard about the rocket fire at Israel I felt it was a danger to Italy and to the entire West.' -- Silvio Berlusconi

'While we speak here today thousands of people are living in fear and dread of missile attacks and acts of terror by Hamas.' -- Angela Merkel

These quotes are chosen at random from a script written in the theatre of the absurd known as ‘the west’. Does Barrack Obama, the Harvard law graduate, not know that Jerusalem is an occupied city? Does Hillary Clinton not know that the Israeli ‘families’ living at Gilo have built their homes on land belonging to someone else? Does Silvio Berlusconi seriously regard Hamas rocket attacks as a threat to Italy and even the ‘entire West’? Barrack Obama and Hillary Clinton were speaking at the AIPAC conference in Washington last June, Angela Merkel in the Knesset in March and Silvio Berlusconi at Sharm al Shaikh this week. He and other European ‘leaders’, as they are called, Merkel, Sarkozy and Gordon Brown among them, had gathered in Egypt to ‘discuss’ Gaza with Husni Mubarak and Mahmud Abbas, i.e to tell them what their part would be in the European plan to bring peace to Gaza.

Remember that during the three weeks of Israel’s onslaught on Gaza close to 500 children were amongst the 1300 people killed. More than 85 per cent of them were civilians. As bodies are still being pulled out of the rubble it will be some time before the final civilian death toll is known. Banned weapons were used. Whole families were massacred and whole streets destroyed with bunker buster bombs. The living was left for days alongside the dead because Israeli soldiers prevented ambulances and medics from reaching them. Trapped between the sea and the fences erected by Egypt and Israel the Gazans were simply shot down like animals in a game reserve. Then the killers were hauled off so that Barack Obama’s inauguration would not be ruined by the spectacle of children still being killed.