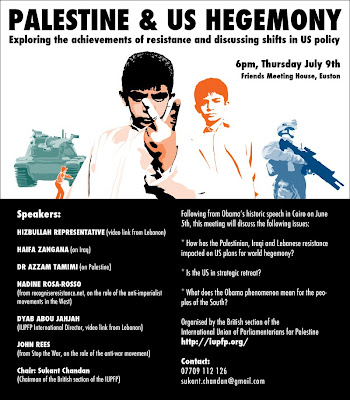 (from recogniseresistance.net, on the role of the anti-imperialist movements in the West)

(from Stop the War, on the role of the anti-war movement)

Chair: Sukant Chandan (Chairman of the British section of the IUPFP)

Following from Obama’s historic speech in Cairo on June 5th, this meeting will discuss the following issues:

* How has the Palestinian, Iraqi and Lebanese resistance

impacted on US plans for world hegemony?

* Is the US in strategic retreat?

* What does the Obama phenomenon mean for the peoples of the South?

Organised by the British section of the

International Union of Parliamentarians for Palestine