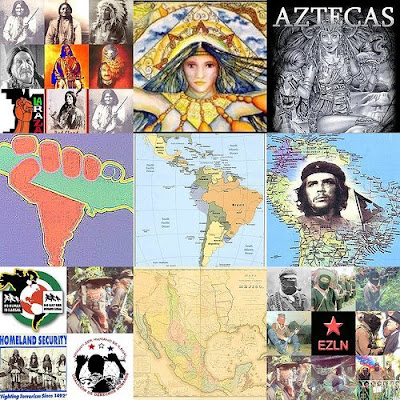 Here's an article about the recent anti-colonial gathering in
Venezuela, http://www.venezuelanalysis.com/news.php?newsno=2381
... Dustin Rivers (Redwire's new Arts Director) http:// liberatedyet.blogspot.com/ was in attendance, who is posting updates
on his blog.

Minister Nicia Maldonado assured that along with the recognition of
land titles, the government will provide financial support for
projects of integral development and housing for the indigenous
communities of Pumé, Yaruro, Kariña and Warao, the first peoples of
the states of Apure, Anzoátegui, and Bolívar.

She also said that during the past eight years the Venezuelan
government has handed over nine-hundred thousand hectares of land
titles to the indigenous peoples of various regions of Venezuela.

The minister said that 2,205 indigenous communities representing more
than forty different groups had been identified at a national level,
including 26 communities in urban zones and that the delivery of
resources for the development of projects would come through
financing plans presented by the Indigenous Communal Councils
throughout the country.

The minister confirmed that the National Registrar of Indigenous
Communal Councils had reached 800 and of these, 520 had so far
received financing from the national government for various
development projects. She added that financial resources would be
made available for the other 280 Communal Councils.
She explained that the Chavez government has encouraged a process of
"dignification of the original peoples of the country," through
incorporating them into the education missions, Robinson, Ribas and
Sucre, as well as programs of social production such as Mission
Vuelvan Caras, now called Mission Ché Guevara, among others.
Maldonado also emphasized that the Constitution of the Bolivarian
Republic of Venezuela "rescued the dignity and rights of the original
peoples," through the Organic Law of the Indigenous Peoples.

The First International Congress of the Anti-imperialist Indigenous
Peoples of Latin America (Abya Yala), also opened yesterday in San
Tomé. Minister Maldonado said the conference, while promoting
cultural diversity, had an "integrationist and unifying character"
with the aim of creating a front against the political hegemony of
the US imperialism.

The first day of the congress covered issues of empowerment of
indigenous people, through the articulation of their demands at a
national level and expressions of communal power such as the Communal
Councils in Venezuela, as well as the importance of promoting and
strengthening cultural diversity and preserving indigenous languages,
and the Bolivarian Alternative for the peoples of the Americas (ALBA).

The indigenous peoples of the Americas will also share their
experiences of US imperialism, privatization of land and resources
and struggles against privatization and for the recognition of land
rights. Also to be discussed at the conference is the concept of
'Indo-American socialism', the discourse of Socialism of the 21st
Century, and more specifically the Bolivarian Revolution in
Venezuela, including the "five constituent motors" for pushing the
revolution forward, and the role of indigenous peoples within the
revolution.

"We are going to celebrate this congress with the aim of going
towards the formation of a Continental Anti-imperialist Indigenous
Council, constructing 'Indo-American' socialism and the Bolivarian
Alternative of the peoples of the Americas," declared Maria Caicuto,
the vice-minister for the communal indigenous territory of the
Deltas, Mountains, Coasts and Mangroves.

The closing of the conference coincides with the International Day of
Indigenous Peoples on Aug 9.
Posted by Ana at 14:34

As always an excellent posting.The
way you write is awesome.Thanks. Adding more information will be more useful.