All thats left is Struggle 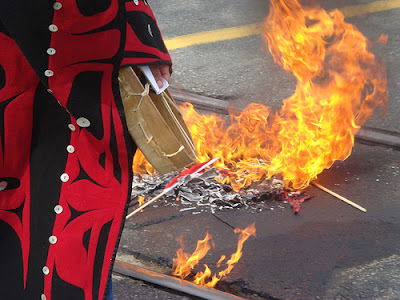 Harriet Nahani is an Elder of the Pacheedaht Nation. Below, she introduces two essentials in understanding the Native experience in B.C.

On colonization:
We're in an awful state.

I'm not talking about just where I live--I'm talking about all across the country. We live in dictatorships run by federal government band-elected Band Chiefs, [and] Councillors.

We survived for 50,000 years under a chief who looked after all his people, or her people, depending on where you lived. Everything was considered: environment, the people, everything. They had a beautiful system and it was a good life until Europeans came.

Their idea was to civilize us and make us Christians, actually it was a process to take us away from the land.

They took children at five years of age away from their families, housed them in huge Residential Schools--impersonal places--they taught us a little ABC, just a little of that, but they trained us for servitude, this was to serve the white people.

They took our culture, our culture is our spine. We survived for 50,000 years with our methods.

Our ancestors were conservationists.
On de-colonization:
What I would like to see is people with [traditional] knowledge to teach the small, little people how to grow up with pride. This generation is lost. My generation is lost--they're assimilated.

They don't think like an Indian. What I'd like to see is our five-year-olds being taught their language, their songs, their games, their spirituality, their Indian, eh, their Indian-ness.

I'd like to ask all the people out there to reclaim their culture--practice it, teach the children, and let's reclaim our backbone, our culture and put some pride in our children.

"What we need is [an] Aboriginal Malcolm X to put some pride back into these lost souls."
Posted by Ana at 11:54

There has been a growing movement in Canada of indigenous activists, that will create another Malcolm X. Maybe the writer of the post.

Malcolm X was bigger than nationalism. He connected Afro-American struggles, to the world movement against colonialism.

She was the elder that was being honoured in the actions in kkkanada in the previous posts.

Malcom X has always been our brother